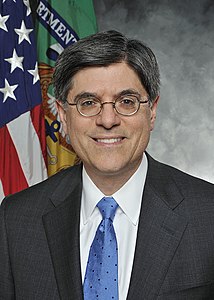 Who is Jack Lew?

Jacob Joseph "Jack" Lew is an American government administrator and attorney who is the 76th and current United States Secretary of the Treasury, serving since 2013. He served as the 25th White House Chief of Staff from 2012 to 2013. Lew previously served as Director of the Office of Management and Budget in the Clinton and Obama Administrations, and is a member of the Democratic Party.

Born in New York City, Lew received his A.B. from Harvard College and his J.D. from Georgetown University Law Center. Lew began his career as a legislative assistant to Representative Joe Moakley and as a senior policy adviser to former House Speaker Tip O'Neill. Lew then worked as an attorney in private practice before working as a deputy in Boston's office of management and budget. In 1993, he began work for the Clinton Administration as Special Assistant to the President. In 1994 Lew served as Associate Director for Legislative Affairs and Deputy Director of the Office of Management and Budget, where he served as Director of that agency from 1998 to 2001 and from 2010 to 2012. After leaving the Clinton Administration, Lew worked as the Executive Vice President for Operations at New York University from 2001 to 2006, and as the COO at Citigroup from 2006 to 2008. Lew then served as the first Deputy Secretary of State for Management and Resources, from 2009 to 2010.

Discuss this Jack Lew biography with the community: