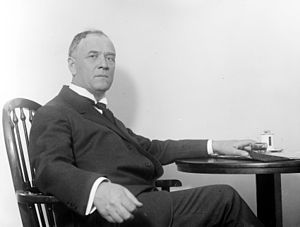 James B. A. Robertson

Who was James B. A. Robertson?

James Brooks Ayers Robertson, sometimes called J. B. A. Robertson, was an American lawyer, judge and the fourth governor of Oklahoma. Robertson was appointed by the state's first governor, Charles N. Haskell to serve as a district judge.

Passing a bar exam at the age of 21, Robertson became one of the most resourceful trial lawyers and legal counselors in the Oklahoma and Indian territories. His gubernatorial term was marked by Oklahoma's ratification of the Eighteenth Amendment and Nineteenth Amendment to the United States Constitution, the Tulsa Race Riot, and scandals.

Robertson died in 1938 from cancer and is buried in Chandler, Oklahoma.

Discuss this James B. A. Robertson biography with the community: