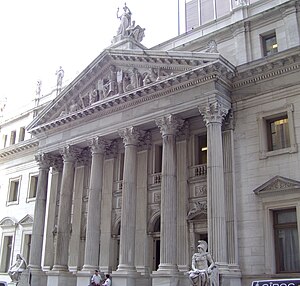 Who was James Brown Lord?

James Brown Lord was an American architect, working in a Beaux-Arts idiom, with a practice in New York City. His Appellate Court House was his most prominent commission, noted at the time of his premature death, at the age of forty-three. He designed one of the first of the Carnegie libraries, the Yorkville Branch of the New York Public Library, at 222 East 79th Street.

Lord was born in New York, into a distinguished family, the son of James Couper Lord and grandson of Daniel Lord, a prominent lawyer in New York. His mother was a daughter of James Brown, founder of the firm that became Brown Brothers Harriman. He graduated from Princeton University in 1879 and apprenticed in the architectural office of William A. Potter. He was a member of the Tuxedo Club and designed many of the buildings at Tuxedo Park, New York.

He married Mary Townsend Nicoll, of a distinguished New York family and was a member of the Metropolitan Club, the Union League, the Players Club, the Racquet Club and professionally of the American Institute of Architects and the National Academy of Design, where he was a Fellow. He is buried in Green-Wood Cemetery, Brooklyn.

Discuss this James Brown Lord biography with the community: