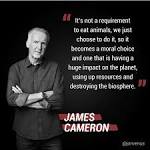 Who is James Cameron?

James Francis Cameron is a Canadian film director, film producer, deep-sea explorer, screenwriter, and editor. He first found success with the science-fiction hit The Terminator. He then became a popular Hollywood director and was hired to write & direct Aliens and three years later followed up with The Abyss. He found further critical acclaim for his use of special effects in the action packed blockbuster Terminator 2: Judgment Day. After his film True Lies Cameron took on his biggest film at the time, Titanic, which earned him three Academy Awards for Best Picture, Best Director and Film Editing. After Titanic, Cameron began a project that took almost 10 years to make: his science-fiction epic Avatar, for which he received the three same Academy Award nominations. In the time between making Titanic and Avatar, Cameron spent several years creating many documentary films and co-developed the digital 3D Fusion Camera System. Described by a biographer as part-scientist and part-artist, Cameron has also contributed to underwater filming and remote vehicle technologies. On March 26, 2012, Cameron reached the bottom of the Mariana Trench, the deepest part of the ocean, in the Deepsea Challenger submersible. He is the first person to do this in a solo descent, and is only the third person to do so ever.

Discuss this James Cameron biography with the community: