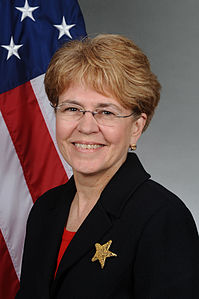 Who is Jane Lubchenco?

Jane Lubchenco is an American environmental scientist and marine ecologist who teaches and does research at Oregon State University. Her research interests include interactions between the environment and human well-being, biodiversity, climate change, and sustainable use of oceans and the planet. From 2009-2013, she served as Administrator of NOAA and Under Secretary of Commerce for Oceans and Atmosphere.

After resigning from NOAA, she was the Mimi and Peter Haas Distinguished Visitor in Public Service at Stanford University. In June 2013, she returned to Oregon State University where she was on the faculty prior to being invited by President-Elect Obama to serve on his ‘science team.’

Discuss this Jane Lubchenco biography with the community: