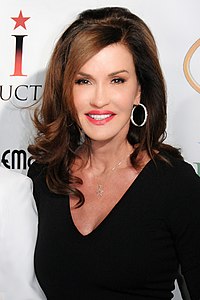 Who is Janice Dickinson?

Initially notable as a model, she has described herself as the first supermodel. One of the most successful models throughout the 1970s and 1980s, she expanded her profession to reality television in 2003 by judging for four cycles on America's Next Top Model. She subsequently opened her own modeling agency in 2005, which was documented in the reality-television series The Janice Dickinson Modeling Agency.

Discuss this Janice Dickinson biography with the community: