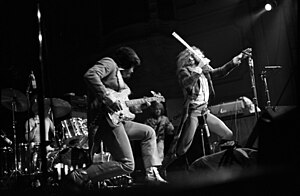 Who was Jethro Tull?

Jethro Tull was an English agricultural pioneer from Berkshire who helped bring about the British Agricultural Revolution. He perfected a horse-drawn seed drill in 1701 that economically sowed the seeds in neat rows, and later a horse-drawn hoe. Tull's methods were adopted by many large landowners, and they helped form the basis of modern agriculture.

The progressive rock band Jethro Tull was named after him.

Discuss this Jethro Tull biography with the community: