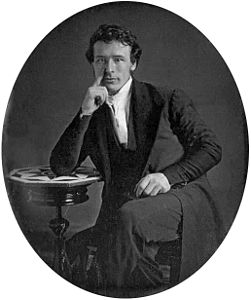 Who was John Jabez Edwin Mayall?

John Jabez Edwin Paisley Mayall was an English photographer who in 1860 took the first carte-de-visite photographs of Queen Victoria.

Born on 17 September 1813, in Manchester, the county of Lancashire, his birth name was registered as Jabez Meal. He was the son of John and Elizabeth Meal. His father was a manufacturing chemist believed to have specialized in the production of dyes for the linen industry. By 1817 John Meal and his family were living at Lingards, near Huddersfield in the cloth manufacturing region of West Yorkshire. In Baine's Directory of 1822, Mayall's father, John Meal, is listed as a dyer in Linthwaite.

Discuss this John Jabez Edwin Mayall biography with the community: