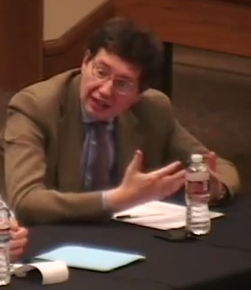 Who is John McGinnis?

John Oldham McGinnis is a professor at Northwestern University School of Law and author of over 90 academic and popular articles and essays. His popular writings have been published in The Wall Street Journal, National Review, and Policy Review.

McGinnis graduated from the Phillips Exeter Academy in 1975, and earned a B.A. from Harvard University in 1978, an M.A. from Balliol College, Oxford University in 1980, and a J.D. magna cum laude from Harvard in 1983. In 1997 he received the Paul M. Bator Award, which is awarded annually by the Federalist Society to an "outstanding legal scholar" under forty. McGinnis worked in the Office of Legal Counsel, Department of Justice from 1985 to 1991. He has given 10 testimonies before congress. McGinnis was also a litigation associate at the prestigious Sullivan & Cromwell, and a clerk on the United States Court of Appeals for the District of Columbia.

Discuss this John McGinnis biography with the community: