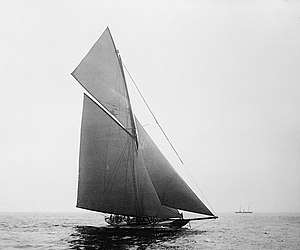 Who was John S. Johnston?

John S. Johnston was a late 19th-century maritime and landscape photographer. He is known for his photographs of racing yachts and New York City landmarks and cityscapes.

Collections of Johnston's work exist today at the Mystic Seaport Museum, the Museum of the City of New York, the National Museum of American History, the Hallmark Photographic Collection, the Metropolitan Museum of Art, the New York Public Library, the Seattle Art Museum, and many other museums and archives across the United States.

Johnston was also an active canoeist. According to Forest and Stream magazine, he was "one of the old-time disciples of MacGregor; taking up canoeing as a boy in England when the sport was still a novelty."

He reportedly worked in partnership with C.

Discuss this John S. Johnston biography with the community: