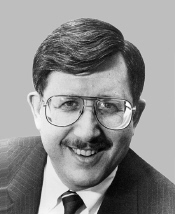 Jon D. Fox was a Republican member of the U.S. House of Representatives from Pennsylvania.

Jon Fox was born in Abington, Pennsylvania. He graduated from Pennsylvania State University in State College, PA in 1969, and earned a J.D. from the Delaware School of Law, in Wilmington, Delaware, in 1975. He served in the United States Air Force Reserve from 1969 to 1975. He held positions with the General Services Administration, and was a guest lecturer for the Presidential Classroom for Young Americans. From 1976 to 1984 he was assistant district attorney.

In 1984, he made his first successful run at political office, winning a seat in the Pennsylvania House of Representatives. He would serve in the House until the 1991 primary election, when he challenged the incumbent GOP commissioners for a seat on the Montgomery County Board of Commissioners. Fox and Mario Mele defeated the incumbents and went on to win the general election. However, Fox, who believed that he would be elected chairman, was surprised when Mele nominated himself for the job with Democratic Commissioner Joe Hoeffel seconding.

Discuss this Jon D. Fox biography with the community: