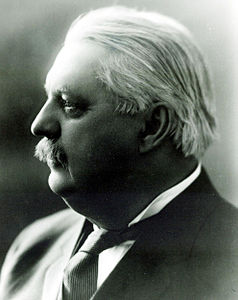 Who was Joseph Henry Kibbey?

Joseph Henry Kibbey was an American attorney who served as Associate Justice of the Arizona Territorial Supreme Court from 1889 to 1893 and Governor of Arizona Territory from 1905 to 1909. His legal career is most remembered for his efforts in the area of water law, his key legal contributions being the "Kibbey Decision", a legal ruling establishing the principle that "water belongs to the land", and creation of the legal framework for the Salt River Valley Water User's Association, a model for federal water projects in the American West. As governor, Kibbey was a leader in the effort to prevent Arizona and New Mexico territories from being combined into a single U.S. state.

Discuss this Joseph Henry Kibbey biography with the community: