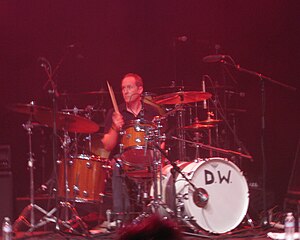 Who is Josh Freese?

Josh Freese is an American session drummer and songwriter. He is a permanent member of The Vandals and Devo having formerly played drums for Nine Inch Nails from late 2005 until late 2008, for A Perfect Circle from 1999 to 2012, and for Guns N' Roses from mid-1998 to 2001. Freese has appeared on close to 400 records. He is currently performing live with The Replacements, Devo, The Vandals and Sublime with Rome. In December 2010, Josh began touring with Paramore on their South American Tour, temporarily replacing the drummer Zac Farro after he and his brother left the band earlier the same month.

Discuss this Josh Freese biography with the community: