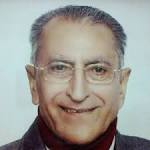 K. C. Verma was the Director of Research and Analysis Wing, the external intelligence agency of India, his official designation was Secretary. He did his schooling from Mayo College, Ajmer. He belongs to the 1971 Jharkhand IPS cadre. He started his career at the Intelligence Bureau, was appointed as head of the Narcotics Control Bureau in 2005, and was later elevated to the position of Secretary and also served as Internal Security Adviser to Home Minister. He was laterally transferred to head R&AW after Ashok Chaturvedi retired from the post on January 31, 2009. One of the major challenges for K. C. Verma had been professionalise and streamline the agency, which has been in news in recent times for various scandals and controversies.

Discuss this K. C. Verma biography with the community: