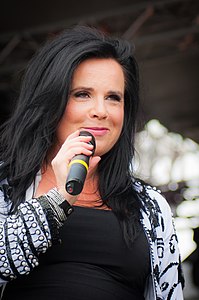 Who is Kaija Koo?

Kaija began her career when she was 17 years old, as a member of a band Steel City, later known as Kaija Koo Band, until it broke down and Kaija Koo became a soloist. Her debut solo album Kun savukkeet on loppuneet was released in 1986. The next album Tuulten viemää, created with her then-husband Markku Impiö, released in 1993, was Kaija Koo's major breakthrough. It sold 175 000 copies, making it the sixth-best selling album of all times in Finland. Kaija has also participated in the Finnish qualification of Eurovision Song Contest 1981 as a member of the background choir in Frederik's song "Titanic".

Since her breakthrough, she has been very active and still successful, releasing a new album every few years. The lyrics were written by Kaija and Markku together and songs are composed by Markku. However, they divorced in 2006. During her career, Kaija Koo has sold over 530,000 certified records, which makes her the 16th-best-selling music artist, the ninth-best-selling soloist and the third-best-selling female soloist in Finland. In June 2010, she signed out of Cosmos Music Group and started under Päijät-Hämeen Sorto ja Riisto, an independent label established in September 2009 by the members of the Finnish rock band Apulanta. In 2010, she released the number-one single "Vapaa", which belongs to the album Irti, released shortly after. Irti has thus far peaked at number two on the Finnish Albums Chart.

Discuss this Kaija Koo biography with the community: