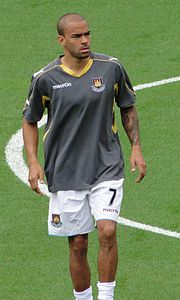 Who is Kieron Dyer?

Kieron Courtney Dyer is an English footballer who played as a midfielder, most recently for Middlesbrough. Born in Ipswich, he played youth football for his home club before going on to make nearly 100 league appearances for the club's first team. He was sold to Newcastle United for £6m, at the time the highest fee paid for an Ipswich player, and made nearly 200 appearances for Newcastle between 1999 and 2007.

A £6m move to West Ham United followed, but Dyer suffered from various injuries, restricting him to 30 league appearances in four seasons. After a short loan to Ipswich Town in March 2011, he signed for newly promoted club Queens Park Rangers ahead of their 2011–12 Premier League season. However, his time at QPR was again blighted by injuries and he made just eight appearances for the club before being released in January 2013. He has represented England on 33 occasions and was a member of the England squads at the 2002 FIFA World Cup and UEFA Euro 2004.

Discuss this Kieron Dyer biography with the community: