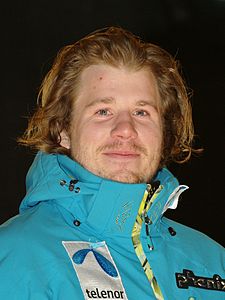 Who is Kjetil Jansrud?

Kjetil Jansrud is a World Cup alpine ski racer and Olympic medalist from Norway. He races in all five alpine disciplines, and his best event is the giant slalom, with six World Cup podiums and one in the Olympics. Born in Stavanger, Jansrud hails from Vinstra in Gudbrandsdalen.

At the 2006 Winter Olympics in Turin, Jansrud finished tenth in the combined. He broke his thumb in the Olympic giant slalom which ended his 2006 season. A bulging disc discovered that September kept him out of the entire 2007 season. Jansrud made his first World Cup podium in January 2009 at Adelboden and finished ninth in the super combined at the 2009 World Championships. He won the silver medal in giant slalom at the 2010 Winter Olympics.

Jansrud won his first World Cup race in March 2012 on home snow at Kvitfjell; he made the podium in all three speed events over the weekend, capped off with a victory in the super G on Sunday.

At the first men's race of the 2013 World Championships, Jansrud crashed in the super G, but got up and skied down to the finish. It was later revealed that he tore a ligament in his left knee, ending his 2013 season.

Discuss this Kjetil Jansrud biography with the community: