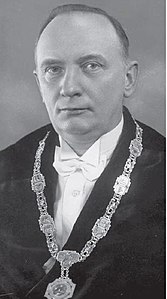 Who was Klaas Schilder?

Schilder was born into a state church family in Kampen, the Netherlands; the family joined the Gereformeerde Kerken when he was a child. After graduating from a Reformed gymnasium, he took his theological studies at the Theologische School of De Gereformeerde Kerken in Kampen and graduated cum laude in 1914. Schilder was a pastor at Ambt-Vollenhove, Vlaardingen, Gorinchem, Delft, Oegstgeest, and Rotterdam-Delfshaven. He arrived in Rotterdam in 1928, where he preached to full churches in spite of the fact that services were never shorter than two hours. During this period Schilder published his three-part work, Christus in Zijn lijden, commonly known in English as The Trilogy or The Schilder Trilogy. This work was a massive expansion on a series of sermons Schilder had preached in Kampen. The publisher, J. H. Kok, heard those sermons and requested Schilder to write them out so that he could publish them. Schilder agreed to this upon the condition that Kok paid for a stenographer who would type out his dictation. For many days Schilder walked and talked. The first edition, on which the English translation is based, was published before World War II. While in hiding during the war Schilder revised the text and after the war a new Dutch edition was published. However, his most important writings were on the Church and her need and obligation to be visibly united in Christ. In these writings he shows himself a true student of John Calvin. The biography by Rudolf van Reest, Schilder's Struggle for the Unity of the Church, which reads like a novel, is available from Inheritance Publications, which publisher is also currently working on publishing all of Schilder's writings.

Discuss this Klaas Schilder biography with the community: