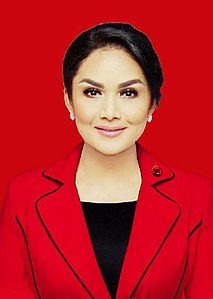 Krisdayanti, often known by her moniker KD, is an Indonesian singer and actress. She is the younger sister of Yuni Shara, another Indonesian singer. She is the daughter of Trenggono and Rachma Widadiningsih. At the age of 9, she sang a song for the movie Megaloman. Three years later, she released her first album, Burung-Burung Malam, together with the soundtrack album for Catatan Si Emon. While still in high school, Yanti participated in numerous singing and modelling competitions. In 1991, she was a finalist in the GADIS Sampul competition.

With the help of Younky Soewarno and Chris Pattikawa, Yanti participated in the 1992 Asia Bagus star-search program, eventually winning the grand prize at the Asia Bagus film festival in Japan. As a result of her winning the Asia Bagus competition, Yanti recorded an album in Singapore with Pony Canyon as well as a single which only saw airplay in Singapore and Japan. In 1997, she was chosen as "The Best of Asia Bagus". She also won several awards, such as Best Indonesian Album, in Malaysia in 1999, as well as MTV's "Most Wanted Female Artist" and "Most Wanted Indonesian Video" awards. During the duration of 2004, Yanti held eight concerts in different cities, including some international ones.

Discuss this Krisdayanti biography with the community: