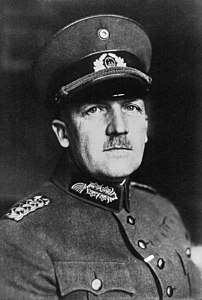 Who was Kurt von Schleicher?

Kurt von Schleicher was a German general and the last Chancellor of Germany during the era of the Weimar Republic. Seventeen months after his resignation, he was assassinated by order of his successor, Adolf Hitler, in the Night of the Long Knives.

Discuss this Kurt von Schleicher biography with the community: