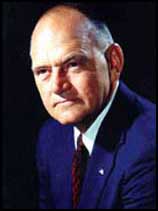 Who was L. Patrick Gray?

Louis Patrick Gray III or Pat Gray was acting Director of the Federal Bureau of Investigation from May 2, 1972 to April 27, 1973. During this time, the FBI was in charge of the initial investigation into the burglaries that sparked the Watergate scandal, which eventually led to the resignation of President Nixon. Gray was nominated as permanent Director by Nixon on February 15, 1973 but failed to win Senate confirmation. He resigned as acting FBI director on April 27, 1973, after he admitted to destroying documents received on June 28, 1972, 11 days after the Watergate burglary, that had come from convicted Watergate conspirator E. Howard Hunt's safe, given to him by White House counsel John Dean.

By the time Gray had successfully defended himself against five federal grand juries and four committees of Congress, he had been vilified by the press and denounced by the prosecutors who could not prove his guilt. Gray remained publicly silent about the Watergate scandal for 32 years, speaking to the press only once, near the end of his life; this was shortly after Gray's direct subordinate at the FBI, Mark Felt, unexpectedly proclaimed himself to have been the secret source to The Washington Post known as “Deep Throat”.

Discuss this L. Patrick Gray biography with the community: