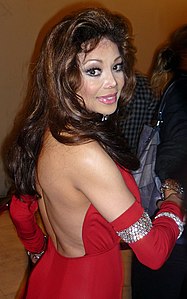 Who is La Toya Jackson?

La Toya Yvonne Jackson is an American singer-songwriter, musician, author, television personality, actress, businesswoman, philanthropist, activist and former model. She is the fifth child of the Jackson family. She maintained a career as a singer throughout the 1980s and 1990s, and returned to music in 2004 with her Billboard charting songs "Just Wanna Dance" and "Free the World". An EP called Starting Over was released on June 21, 2011.

Discuss this La Toya Jackson biography with the community: