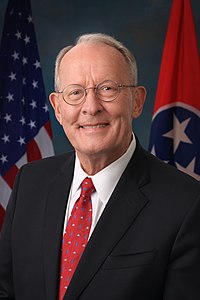 Who is Lamar Alexander?

Born in Maryville, Tennessee, Alexander is a graduate of Vanderbilt University and New York University School of Law. He worked as a legislative assistant to Senator Howard Baker and as an assistant in the Nixon Administration in the late 1960s. He won the Republican nomination for the 1974 Tennessee gubernatorial election but was defeated by Congressman Ray Blanton in the general election.

In 1978, Alexander defeated Knoxville Democrat Jake Butcher for the governorship, serving as the 45th Governor of Tennessee from 1979 to 1987. In 1991, he was nominated by President George H. W. Bush to serve as Secretary of Education, from 1991 to 1993. Alexander ran unsuccessfully for the Republican presidential nomination in 1996 and 2000.

He defeated Democratic Congressman Bob Clement to replace outgoing Senator Fred Thompson in 2002 and won reelection in 2008. Alexander announced that he will run for reelection in 2014.

Discuss this Lamar Alexander biography with the community: