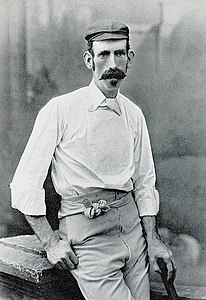 Who was Louis Hall?

Born in Batley, Yorkshire, England, Hall made his debut in 1873, and came of age with an innings of 78 for a local Eighteen against the Australian XI in 1878. Thereafter, until 1892, he was a mainstay of Yorkshire County Cricket Club.

Hall carried his bat seventeen times in first-class cricket, a feat matched only by W. G. Grace and Cecil Wood. He played for the Players against Gentlemen five times, and captained Yorkshire a few times in the absence of the regular captain Lord Hawke.

Defensive by nature, Hall was not an attractive batsman, with his primary shot being the front foot defence. He was awarded a benefit match against Surrey in 1890, but he deferred it so that the injured Billy Bates could have his that year.

Discuss this Louis Hall biography with the community: