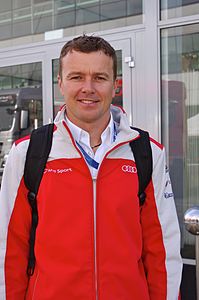 Who is Marcel Fässler?

Marcel also drove the F1 Mercedes-Benz safety car for one event in Canada, while regular driver Bernd Mayländer was off due to an injury. He was on track for three laps after a crash involving Williams' Juan Pablo Montoya and Ferrari's Rubens Barrichello.

Fässler switched to sports cars in 2006, finishing second at the Spa 24 Hours in a Phoenix Aston Martin DBR9 and collecting two overall podiums at the Le Mans Series for Swiss Spirit. In 2007, he returned to open-wheel racing for A1 Team Switzerland in the 6th round of the A1 Grand Prix series held in Taupo, New Zealand, and in the 9th round at the Autódromo Hermanos Rodríguez, Mexico. He also won the Spa 24 Hours on a Chevrolet Corvette C6.R for Phoenix Carsport.

Discuss this Marcel Fässler biography with the community: