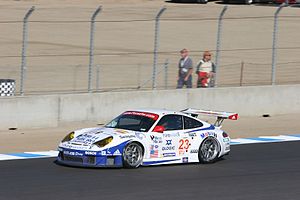 Who is Marcel Tiemann?

Marcel Tiemann is a race driver from Germany. He is best known for being a five-time winner of the 24 Hours Nürburgring race.

He is the son of Hans-Jürgen Tiemann, an amusement park owner, and also a successful race driver, winner of the 24 Hours Nürburgring in 1997 and 1999.

Tiemann was seriously injured in a heavy crash during an International GT Open race at Imola on May 23, 2010. Tiemann, who was driving an Audi R8, collided with another car at the rolling start and was forced into a retaining wall at high speed. He sustained brain trauma, a fractured vertebra and broken ribs in the impact, and was been placed in a medically induced coma to assist his recovery. He later regained consciousness and mostly recovered, but has been unable to race since due to the neurological damage and vision problems he still suffers from as a result of the accident.

Discuss this Marcel Tiemann biography with the community: