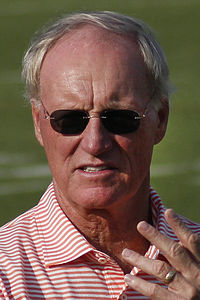 Who is Marty Schottenheimer?

Martin Edward "Marty" Schottenheimer is a former professional American football player and coach. Over his career, he has served as head coach of the Cleveland Browns, Kansas City Chiefs, Washington Redskins, and San Diego Chargers. He has the most wins of any NFL coach since 1966 to never coach a team in a Super Bowl. He was fired from his head coaching position with the San Diego Chargers in 2007, after leading the Chargers to a 14–2 record but a disappointing second round loss. He later emerged as the head coach of the Virginia Destroyers of the United Football League, where he would win his only championship as a coach in his lone season there.

Discuss this Marty Schottenheimer biography with the community: