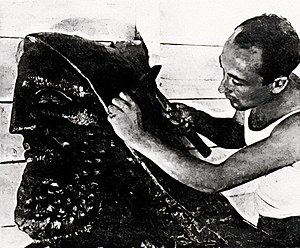 Who was Maurice Ascalon?

Maurice Ascalon, was an Israeli designer and sculptor. He was, by some accounts, considered the father of the modern Israeli decorative arts movement.

Maurice Ascalon was born as Moshe Klein in eastern Hungary. From an early age, he was determined to pursue his artistic yearnings, however in order to do so, he was forced to abandon his ultra-religious Chasidic Jewish roots – for artistic expression was frowned upon in the eastern Hungarian “shtetl” in which he was raised. When he was 15 years old Klein left his family and boyhood home to study art at the Académie Royale des Beaux-Arts in Brussels. He took with him an in-depth understanding of the rituals and traditions of the Jewish ceremonies, which knowledge he would later apply to his artistic endeavors.

In 1934, after undertaking his formal artistic training in Brussels and later Milan, Maurice Ascalon immigrated to the land of Israel. There he met his wife-to-be, Zipora Kartujinsky, a Polish-born Jew, granddaughter to the distinguished cartographer and scientist of the same surname..

Discuss this Maurice Ascalon biography with the community: