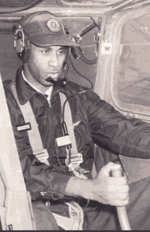 Milton Pitts Crenchaw is the father of black aviation in Arkansas. He was the first Arkansan to be successfully trained by the federal government as a civilian licensed pilot. He overcame racism and bigotry to serve his country during World War II as a civilian flight instructor.

Crenchaw was born to Reverend Joseph C. Crenchaw and Ethel Pitts Crenchaw. His father was a local civil rights leader with the NAACP who was president of the Little Rock Chapter during the Little Rock Central High School Crisis, and a professional tailor. His mother was a beautician. Crenchaw had two siblings. He graduated from Dunbar High School in 1936. After graduating he attended Dunbar Junior College where he received a teaching certificate in auto mechanics. After leaving Dunbar Junior College, Crenchaw pursued a bachelor’s degree in mechanical engineering at the Tuskegee Institute in 1939. He did not receive a degree, however because he postponed his academics to pursue becoming a pilot. Crenchaw was the first Arkansan to arrive and to graduate from Moton Airbase in Tuskegee, Alabama.

Crenchaw went from living the life of a college student to flying in the Civilian Pilot Training Program.

Discuss this Milton Crenchaw biography with the community: