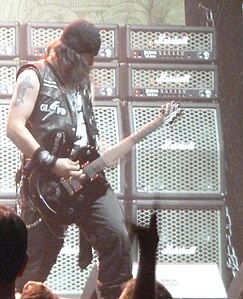 Who is Nick Catanese?

Nick Catanese is the former rhythm guitarist for Black Label Society. He supported lead player Zakk Wylde, who has commented that "If I'm Keith Richards, he's Mick Taylor". Nicknamed "The Evil Twin" for his capability to keep up with Zakk Wylde, Nick joined with him when he noticed Wylde's email address in a magazine, and on a whim told Zakk that if he ever needed a guitar player to let him know. Zakk had been discussing with his wife about getting a second guitarist that very day, then got back to Nick, the two met up and jammed and Nick joined Zakk on the Book Of Shadows tour. When Zakk was looking to form a band in 1998, Nick recommended drummer Phil Ondich to Zakk, Sonic Brew was recorded, and in 1999, John DeServio was added to the lineup on bass - Black Label Society was officially formed. Phil was eventually replaced by Craig Nunenmacher, and several bassists replaced JD until he ultimately returned to the band in October 2005. Nick left Black Label Society in December 2013.

Discuss this Nick Catanese biography with the community: