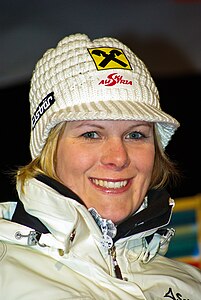 Who is Nicole Hosp?

Born in Ehenbichl, Tyrol, she won the overall World Cup title in 2007 and the season title in giant slalom. A versatile all-around racer, Hosp has won World Cup races in 4 of the 5 alpine skiing disciplines, and was World Champion in the giant slalom in 2007.

Hosp suffered an anterior cruciate ligament injury to her right knee at Sölden in October 2009 and missed the rest of the 2010 season, including the 2010 Winter Olympics.

Discuss this Nicole Hosp biography with the community: