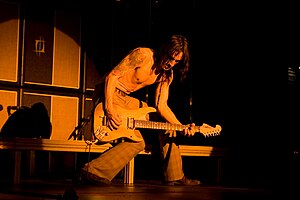 Who is Nuno Bettencourt?

Nuno Duarte Gil Mendes Bettencourt is a Portuguese American guitarist, singer-songwriter, and record producer. He is best known for his role as the lead guitarist of the Boston rock band Extreme whose hits include the acoustic ballads "More Than Words" and "Hole Hearted". The songs reached No.1 and No.4, respectively, on the Billboard Hot 100 singles chart in 1991.

He has since recorded a solo project called Schizophonic as well as with bands he founded including Mourning Widows, Population 1, DramaGods, The Satellite Party, and then reunited with Extreme to record new music and tour.

Since 1990, Bettencourt has had his own line of custom guitars designed by Washburn Guitars. His line is known as the N-Series, and is currently promoting the Washburn N4.

Discuss this Nuno Bettencourt biography with the community: