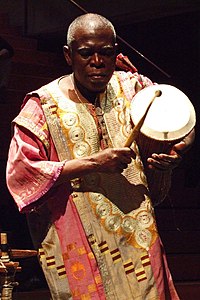 Who was Obo Addy?

Obo Addy was a Ghanaian drummer and dancer who was one of the first native African musicians to bring the fusion of traditional folk music and Western pop music known as worldbeat to Europe and then to the Pacific Northwest of the United States in the late 1970s. He taught music at Lewis & Clark College in Portland, Oregon.

Discuss this Obo Addy biography with the community: