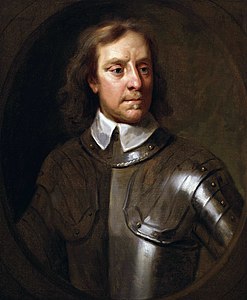 Who was Oliver Cromwell?

Oliver Cromwell was an English military and political leader and later Lord Protector of the Commonwealth of England, Scotland and Ireland.

Born into the middle gentry, Cromwell was relatively obscure for the first 40 years of his life. After undergoing a religious conversion in the 1630s, he became an independent puritan, taking a generally tolerant view towards the many Protestant sects of his period. An intensely religious man—a self-styled Puritan Moses—he fervently believed that God was guiding his victories. He was elected Member of Parliament for Huntingdon in 1628 and for Cambridge in the Short and Long Parliaments. He entered the English Civil War on the side of the "Roundheads" or Parliamentarians. Nicknamed "Old Ironsides", he was quickly promoted from leading a single cavalry troop to become one of the principal commanders of the New Model Army, playing an important role in the defeat of the royalist forces.

Cromwell was one of the signatories of King Charles I's death warrant in 1649, and, as a member of the Rump Parliament, he dominated the short-lived Commonwealth of England. He was selected to take command of the English campaign in Ireland in 1649–50. Cromwell's forces defeated the Confederate and Royalist coalition in Ireland and occupied the country – bringing to an end the Irish Confederate Wars. During this period a series of Penal Laws were passed against Roman Catholics, and a substantial amount of their land was confiscated. Cromwell also led a campaign against the Scottish army between 1650 and 1651.

Discuss this Oliver Cromwell biography with the community: