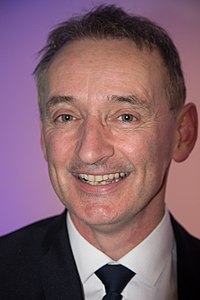 Who is Pat Nevin?

Patrick Kevin Francis Michael "Pat" Nevin is a retired Scottish footballer. In a 20-year career, he played for Clyde, Chelsea, Everton, Tranmere Rovers, Kilmarnock and Motherwell as a winger. Nevin was a fans' favourite at Chelsea during the 1980s. He also won 28 caps for Scotland, scattered across a ten-year international career, and he was selected for the UEFA Euro 1992 finals squad. Since retiring as a player, Nevin has worked as a chief executive of Motherwell and as a football writer and broadcaster. He has also made some appearances on Match of the Day 2 in 2012/13 season, alongside presenter Colin Murray.

Discuss this Pat Nevin biography with the community: