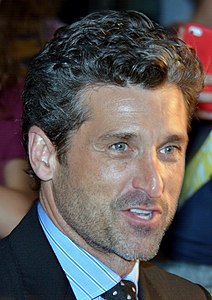 Who is Patrick Dempsey?

Patrick Galen Dempsey is an American actor and race car driver, best known for his role as neurosurgeon Dr. Derek Shepherd on the ABC medical drama Grey's Anatomy. Prior to the series, he made several television appearances and was nominated for an Emmy Award. He has also appeared in several films, including Sweet Home Alabama, Made of Honor, Valentine's Day, Enchanted, With Honors, Flypaper, Freedom Writers, and Transformers: Dark of the Moon.

Dempsey, who maintains an exclusive sports and vintage car collection, also enjoys auto racing in his spare time. He has competed in prestigious pro-am events such as the 24 Hours of Le Mans, Rolex 24 at Daytona sports car race, and Tecate SCORE Baja 1000 off-road race. Prior to the 2013 24 Hours of Le Mans, Dempsey declared that he would "walk away" from acting if he could and dedicate himself full-time to motorsports.

Discuss this Patrick Dempsey biography with the community: