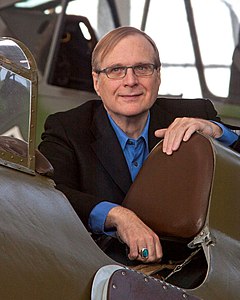 Who is Paul Allen?

Paul Gardner Allen is an American business magnate, investor and philanthropist, best known as the co-founder, with Bill Gates, of Microsoft Corporation. As of March 2013, he was estimated to be the 53rd-richest person in the world, with an estimated wealth of $15 billion.

He is the founder and chairman of Vulcan Inc., which manages his various business and philanthropic efforts. Allen also has a multi-billion dollar investment portfolio including technology companies, real estate holdings, and stakes in other technology, media, and content companies. Allen also owns two professional sports teams, the Seattle Seahawks of the National Football League, and the Portland Trail Blazers of the National Basketball Association. He is also part-owner of the Seattle Sounders FC, which joined Major League Soccer in 2009. Allen's memoir Idea Man: A Memoir by the Cofounder of Microsoft was released on April 19, 2011. The paperback version of Idea Man, which included a new epilogue, came out on October 30, 2012.

Discuss this Paul Allen biography with the community: