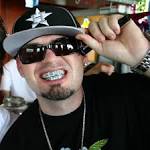 Who is Paul Wall?

Paul Michael Slayton, better known by his stage name Paul Wall, is an American rapper. He is currently affiliated with Swishahouse Records, having released several albums under the label as well as collaborating with other rappers signed to the label. He was formerly musical partners with rapper Chamillionaire releasing several collaborative albums including the independently released Get Ya Mind Correct. In 2005, he was signed to Atlantic Records and became successful with his major-label debut The Peoples Champ. Get Money, Stay True followed in 2007.

Discuss this Paul Wall biography with the community: