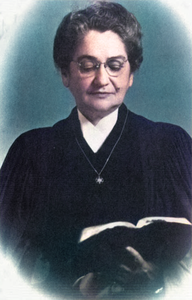 Who was Paula Ackerman?

Paula Ackerman was the first woman to perform rabbinical functions in the United States, leading the Beth Israel congregation in Meridian, Mississippi from 1951–53 and the Beth-El congregation in Pensacola, Florida briefly in the 1960s. She led the National Committee on Religious Schools for the National Federation of Temple Sisterhoods.

Born as Paula Herskovitz in Pensacola, Florida, she married Rabbi William Ackerman in 1919.

She led the congregation at the Temple Beth Israel in Meridian, Mississippi, beginning December 12, 1951. She had led services before, when her husband was absent or ill.

She continued to lead the congregation until a replacement was found in September 1953, although she was never formally ordained.

Regarding her chances of being selected for the job, Ackerman wrote to a friend, "I also know how revolutionary the idea is—therefore it seems to be a challenge that I pray I can meet. If I can just plant a seed for the Jewish woman's larger participation—if perhaps it will open a way for women students to train for congregational leadership—then my life would have some meaning."

Discuss this Paula Ackerman biography with the community: