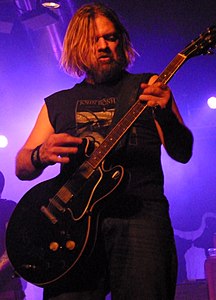 Who is Pepper Keenan?

Pepper J. Keenan, is an American vocalist and guitarist, best known for his work with heavy metal bands Corrosion of Conformity and Down. He joined Corrosion of Conformity in 1989, but did not become the lead singer until the recording of Deliverance in 1994. In 1991 he formed Down with Phil Anselmo of Pantera, Jimmy Bower of Eyehategod, and Kirk Windstein and Todd Strange of Crowbar.

Discuss this Pepper Keenan biography with the community: