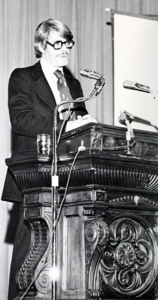 Who is Radu Florescu?

Florescu was born in Bucharest. He received his B.A. and M.A. degrees from Christ Church, Oxford in Great Britain, before moving to the United States, where he completed his Ph.D. at Indiana University. Radu Florescu is now living in the south of France and travels to Boston, where he is working on a new book.

He also contributed to "Historical Mysteries", with his essay concerning the events surrounding the disappearance of the children of Hamelin in 1284.

From 1996 to 2004, Florescu served as Honorary Consul for New England by the Romanian Foreign Ministry, the first person to be appointed to such a position in the United States. His first job as honorary consul was to oversee voting by Boston-area Romanian citizens in one of the first democratic Romanian elections since the Revolution of 1989. He is now Emeritus Honorary Consul.

Discuss this Radu Florescu biography with the community: