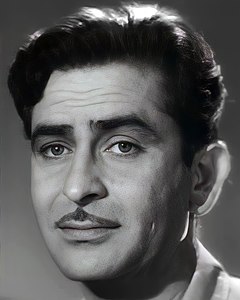 Who was Raj Kapoor?

Raj Kapoor, also known as "The Show Man", was a noted Indian film actor, producer and director of Hindi cinema. He was the winner of two National Film Awards and nine Filmfare Awards in India, and a two-time nominee for the Palme d'Or grand prize at the Cannes Film Festival for his films Awaara and Boot Polish. His performance in Awaara was ranked as one of the top ten greatest performances of all time by Time magazine. His films attracted worldwide audiences, particularly in Asia and Europe. The Government of India honoured him with the Padma Bhushan in 1971 and the Dadasaheb Phalke Award in 1987 for his contributions towards Indian cinema.

Discuss this Raj Kapoor biography with the community: