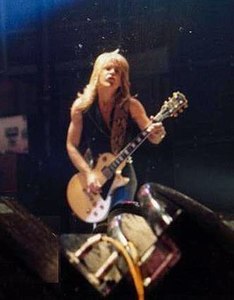 Who was Randy Rhoads?

Randall William "Randy" Rhoads was an American heavy metal guitarist who played with Ozzy Osbourne and Quiet Riot. He died in a plane accident while on tour with Osbourne in Florida in 1982. A devoted student of classical guitar, Rhoads combined his classical music influences with his own heavy metal style. Despite his short career, Rhoads, who was a major influence on neo-classical metal, is cited as an influence by many guitarists and is included in several "Greatest Guitarist" lists.

Discuss this Randy Rhoads biography with the community: