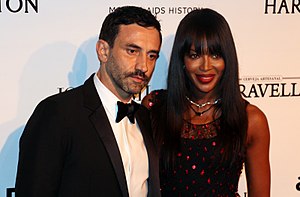 Who is Riccardo Tisci?

Riccardo Tisci is an Italian fashion designer. He studied in Italy, and then graduated from London's Central Saint Martins Academy in 1999, and in 2005 was named Creative Director for Givenchy womenswear and haute couture. In May 2008 he was also named as menswear and accessories designer of the Givenchy men's division.

Tisci's apparent fascination with Gothic touches and space-age minimalism have drawn new attention to the Givenchy brand. Reviews and output so far have been mixed and inconsistent, but many, including influential fashion critics have homed in on Tisci's conceptual leanings, as well as his future potential for revitalizing the Givenchy brand and infusing it with his precision and imagination.

Discuss this Riccardo Tisci biography with the community: