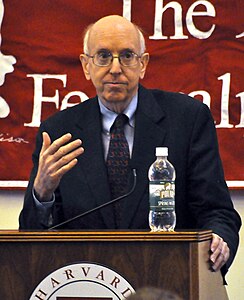 Who is Richard Posner?

Richard Allen Posner is an American jurist, legal theorist and economist. He is currently a judge on the United States Court of Appeals for the Seventh Circuit in Chicago and a Senior Lecturer at the University of Chicago Law School. He is a leading figure in the field of law and economics, and was identified by The Journal of Legal Studies as the most cited legal scholar of the 20th century.

Posner is the author of nearly 40 books on jurisprudence, economics, and several other topics, including Economic Analysis of Law, The Economics of Justice, The Problems of Jurisprudence, Sex and Reason, Law, Pragmatism and Democracy, and The Crisis of Capitalist Democracy. Posner has generally been identified as being politically conservative; however, in recent years he has distanced himself from the positions of the Republican party.

Discuss this Richard Posner biography with the community: