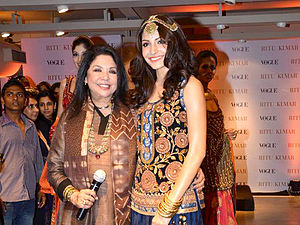 Who is Ritu Kumar?

Ritu Kumar is one of India’s foremost fashion designer, and the first woman to introduce the ‘boutique’ culture in India under the brand name ‘Ritu’. She has developed a unique style of her own, reflecting the ancient traditions of Indian craftsmanship in a contemporary vocabulary. With a background in art history and museology, which has enriched her horizons, Ritu’s understanding of ancient designs and the innovative use of traditional crafts has created a new classicism.

Ritu Kumar as a brand has been admired and worn all over the world. Its patrons include Indian stars such as Vidya Balan, Aishwarya Rai, Priyanka Chopra, Lara Dutta, Dia Mirza to name a few and international celebrities such as the Mischa Barton, Anoushka Shankar and Anna Ivanovic. Since 1994, Ritu Kumar has also designed the wardrobes for the Femina Miss India contestants for their participation in international beauty pageants such as Miss Universe, Miss World and Miss Asia Pacific. Ritu Kumar’s outfits have also been patronized by style icons such as Late Princess Diana and Jemima Khan.

Ritu Kumar has been awarded the Padma Shri Award 2013, the country's fourth highest civilian award for her exceptional and distinguished service in the field of fashion, textile and craftsmanship.

Discuss this Ritu Kumar biography with the community: