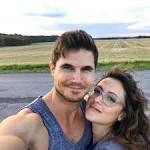 Who is Robbie Amell?

Robert Patrick "Robbie" Amell (born April 21, 1988) is a Canadian actor, perhaps best known for his recurring and guest-starring roles in several television shows, such as the Nickelodeon series True Jackson, VP, Picture This, How I Met Your Mother, and Revenge. He is also known for playing Fred Jones in the television films Scooby-Doo! The Mystery Begins and Scooby-Doo! Curse of the Lake Monster.

Discuss this Robbie Amell biography with the community: