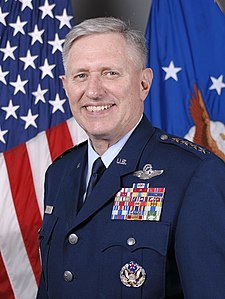 Who is Roger A. Brady?

Roger Alan Brady is a former United States Air Force four-star general who last served as the 33rd Commander, U.S. Air Forces in Europe which he also concurrently served as Commander, NATO Allied Air Command, Ramstein and Director, Joint Air Power Competence Center, Kalkar, Germany from January 9, 2008 to December 13, 2010. Prior to that he served as Deputy Chief of Staff for Manpower and Personnel from June 2004 to January 2008. As Commander, U.S. Air Forces in Europe, he has responsibility for Air Force activities in the U.S. Africa Command theater. He retired from the Air Force on February 1, 2011.

He has commanded a support group and flying training wing, and he was vice commander of an air logistics center. The general has served as a director of personnel, logistics, plans and programs, and operations at three major commands.

Discuss this Roger A. Brady biography with the community: