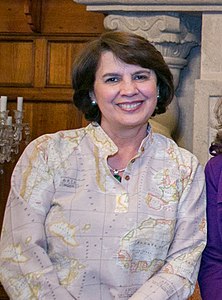 Who is Rosalía Arteaga?

Rosalía Arteaga Serrano is an Ecuadorian politician who served as the country's first female president for only two days in 1997.

She was born in Cuenca, Ecuador. She became Vice President in 1996, following the election of Abdalá Bucaram as President. On February 6, 1997, however, President Bucaram was declared unfit to govern by Congress. Arteaga and congressional leader Fabián Alarcón became locked in a dispute over who should succeed Bucaram since the constitution was vague on the issue. Initially, Alarcón was sworn in with the support of Congress. On February 9, however, Arteaga, who had insisted that as vice president she should become president, was sworn in instead as Ecuador's first female president. Two days later, however, on February 11, with the support of Congress and the army, Alarcón was sworn in again, and Arteaga resigned.

Arteaga continued to clash with Alarcón and resigned from her post as vice president in March 1998. She then ran for president in the elections that were held in May 1998 but received only 3% of the vote.

Discuss this Rosalía Arteaga biography with the community: