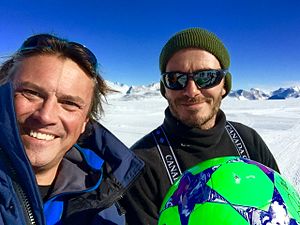 Who is Russ Malkin?

Russ Malkin is a British film producer and creative director. He produced and directed three motorcycle adventure TV documentaries; Long Way Round and Long Way Down featuring Charley Boorman and Ewan McGregor, and Race to Dakar featuring Boorman. The format of these programmes meant that he also made frequent on-screen appearances. This was also the case for By Any Means, starring Boorman, but also featuring Malkin heavily. In 2011, Russ produced and directed a third collaboration with adventurer and actor Charley Boorman, for the Channel 5 prime-time adventure travel series, Charley Boorman’s Extreme Frontiers which spawned a follow-up book and DVD, ‘Extreme Frontiers: Racing Across Canada from Newfoundland to the Rockies’. He also founded the television production company Big Earth, dedicated to planning and composing international events, expeditions and adventure travel programme-making. A hub for adventure travel inspiration, Big Earth helps advise travellers on the best places in the world for off-road escapades and adventure sports, how to film these adventure, and what they, the likeminded traveller, can do to showcase their journeys or experiences online, via editorial, photography and video.

Discuss this Russ Malkin biography with the community: